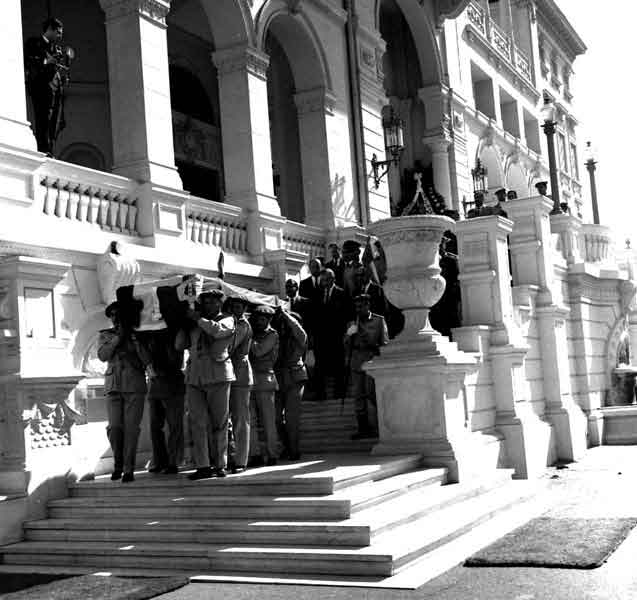 Fifty years ago last night, on September 28, 1970, at 6:15 pm Cairo time, Egyptian president Gamal Abdul Nasser died. Cause: heart attack. A minute before midnight, Egyptian vice-president Anwar Sadat announced the death to the nation. “Abdul Nasser is more than words,” he said. “He is more immortal than all words.” The funeral took place on October 1. Millions of grieving Egyptians surged around the cortege. A government minister later announced that at least 46 persons died in the crush, and 80 were severely injured.

Abdul Nasser may have been “more than words,” but that didn’t stop them from flowing, also in the millions. Even some of the contemporary Western commentary lamented his death.

His departure, wrote the New York Times the next day, “leaves a void that can only add to the chaos already threatening to overwhelm the Middle East.” The Washington Post practically mourned him, praising his “wisdom and underlying political strength,” because he’d recently seemed amenable to American mediation with Israel. Even the Jerusalem Post regretted his demise: “Despite his enmity, Abdul Nasser offered a hope, however slight, which was afforded by no other Arab leader—that of a man strong enough to lead the Arab world to peace.”

True or not? Last year, I published an essay on when and how the unexpected deaths of leaders matter. (Publisher: The Washington Institute for Near East Policy.) Below, I excerpt what I wrote about Nasser.

The crucial question is this: If a leader were to disappear, where would he be in the arc of his life, his career, his vocation? If he is a leader, presumably he has a record of achievement. Is he in the middle of his life’s work, still attending to it? Is he bringing it to a conclusion? Or is it behind him? (This doesn’t directly correlate with age. Sometimes leaders launch early; others do so late.)

Let me now give an example of an unexpected death that came too late to have a huge effect. Gamal Abdul Nasser and his Free Officers overthrew the Egyptian monarchy in 1952. He soon emerged as the first among equals, then as the unquestioned ruler of Egypt. His biography became identical to Egypt’s history: the Soviet alliance, the Suez war, the Nasserist wave of 1958, the makeup and breakup of union with Syria, the stumble of the Yemen war, and the disaster of the 1967 war with Israel.

Nasser became diabetic, according to his wife, in 1958. He smoked a hundred cigarettes each eighteen-hour workday, had arteriosclerosis, and suffered acute pain in his legs, so that he relied heavily on painkillers. In 1969, he had a heart attack and spent six weeks in bed. According to his Egyptian physician, this destroyed 40 percent of his cardiac function. A few months later, Nasser appointed Anwar Sadat as vice president. In the summer of 1970, Nasser went on a three-week visit for treatment in Moscow.

All the while, the Egyptian public was kept completely in the dark; they were told he had influenza. His Soviet doctors urged him to avoid stress, but he ignored them. In 1970, at the close of an Arab summit in Cairo, in the midst of the Black September crisis in Jordan, he suffered another heart attack and died. Sadat later related that he and Nasser had joked about the “poor fellow” who would succeed the president. “It certainly never crossed our minds,” Sadat wrote, “that Nasser would die in the very same month.”

Because of the illusion of immortality Nasser created, his followers, like the journalist Mohamed Heikal, could claim that he was about to write another great chapter when his life was cut short. And because of that, many old Nasserists believed Nasser couldn’t possibly have died of natural causes. Heikal would later go on to insinuate that Sadat poisoned him.

But did Nasser’s death, at age 52, really change the course of events? It is interesting to read a Central Intelligence Agency analysis of this, written early in 1971, a few months after Nasser died. It reviewed all the history-making events of Nasser’s tenure, at home and in the region. Then it added this:

On the face of it, the demise of so powerful and charismatic a leader would appear to mean widespread and fundamental change in the Arab world. And the months since Nasser’s death have indeed seen changes in inter-Arab relations. But these differences have been subtle…This is so because Nasser’s ability to influence events in the Arab world had declined substantially in recent years as a result of the humiliating Egyptian defeat at the hands of Israel in 1967. The other Arab leaders… all felt free to refuse to follow Nasser’s policy direction. In a sense, then, the biggest “post-Nasser” changes had taken place prior to his death.

In other words, he was finished before he was dead; he was already at the end of his arc.

The late Middle East scholar Fouad Ajami once speculated on what would have happened if Nasser had lived some more years. Just as Sadat did, Nasser probably would have gone to war with Israel to break the post-1967 deadlock. It is an argument Sadat himself made in 1974, when he announced that “if Nasser had lived to this day he would be doing what I am doing.” But Ajami went on to add that had Nasser lived, “his charisma would have continued to fade and weaken, and his supporters would have grown increasingly lukewarm and indifferent to him. His premature and sudden death at 52 probably preserved his legacy and added to its potency.”

Now, there is a debate over the extent of continuity and change between Nasser and Sadat. But we can agree that Nasser’s death in 1970 was less consequential than, say, his death would have been in 1954. This date has not been selected at random. In October 1954, Nasser gave a speech in the central square of Alexandria. In the middle of the speech, a would-be assassin, a member of the Muslim Brotherhood, fired eight shots at Nasser. All of them missed, Nasser didn’t flinch, and then he began to roll up the Muslim Brotherhood.

Leaving aside the conspiracy theories (most notably, that Nasser himself engineered the whole thing), the point is this: had Nasser been killed in 1954—before Suez, before the United Arab Republic, before 1967—the effect on Egypt and the region would have been far more profound than the effect of his actual death in 1970.

Again, in making assessments, one has to ask where the leader stands in the arc of his life. In the middle, toward the end, or is all behind him? In 1954, Nasser was positioned somewhere in the middle—after the revolution, full of ambition, but with little to show for it yet. His death by bullet would have had incalculable effects. By 1970, his great achievements and errors were already in the past, his death by heart attack had fewer effects, and these were moderated by his chosen successor.

It isn’t that such departures have no consequences. Specialists can always compose a long list of them. But the list shrinks when a leader is simply putting touches on his largely completed project. Of course, it can always be argued that a departed leader had one more move to make, one more trick up his sleeve. But no one has unlimited moves or tricks, the possibilities recede over time, and leaders late in life are sometimes averse to bold initiatives, especially if they have moved to planning for succession.

End of excerpt. Agree or disagree? Food for thought on this fiftieth anniversary. (For my full assessment of untimely deaths, read my whole essay here. There is an Arabic version right here.)

Cross-posted at the Times of Israel.