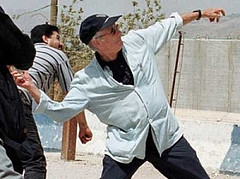 Columbia University will be hosting an “Edward Said Conference” on November 7-8, with the title “1948-1978: Orientalism from the Standpoint of its Victims.” The participants, who include all of Columbia’s Palestinian mandarins, will focus on the contradiction “between European representations and Palestinian realities” as a case study of Orientalism. 1948, the audience will learn, was “a world-event enabled and prepared by the history and structures of Orientalism”—the anti-Oriental, anti-Arab and anti-Islamic racism supposedly endemic to the West since time immemorial, as alleged by Said in his 1978 book, Orientalism. The West therefore owes the Palestinians a reversal of 1948, for sins of misrepresentation going back to Homer.

What the audience on Morningside Heights likely will not hear is the extent to which the Palestinians were victims of their own Orientalist-like prejudices. A prime piece of evidence can be found in the testimony of the late Ibrahim Abu-Lughod, Palestinian academic and native of Jaffa (whose daughter Lila will be a participant in the Columbia conference). Abu-Lughod fled his native Jaffa in 1948, and left an important account of the mood among the city’s Arab inhabitants on the eve of the war:

Now, when I think of those days, I am inclined to think that the inhabitants of Jaffa in general believed—like most of their fellow Palestinians throughout the land—that the Palestinian was braver than the Jew and more capable of standing hardship. They thought that, as the country belonged to the Arabs, they were the ones who would defend their homeland with zeal and patriotism, which the Jews—being of many scattered countries and tongues, and moreover being divided into Ashkenazi and Sephardic—would inevitably lack. In short, there was a belief that the Jews were generally cowards.

This set of familiar prejudices, when directed against Jews, is generally known as anti-Semitism. It is why the Palestinians failed to assess the real strength of their Jewish adversaries in 1948. It also explains why they refused to accept the partition plan—the internationally sanctioned solution for Palestine adopted by the United Nations in 1947. Why concede any of the country to a motley mob of cowardly Jews? And so the Palestinians did become victims—of their own anti-Semitism, which imbued them with a baseless conceit. The people of Jaffa, Abu-Lughod goes on to say, believed that “if they made ready a bit… then they were sure to emerge victorious.”

Instead the Palestinians went down to an ignominious defeat. In doing so, their conduct in the war conformed almost precisely to the conduct they had expected of the Jews—something that made them contemptible in their own eyes and those of other Arabs. The shame still eats at their souls.

This long legacy of underestimating the Israelis because they are Jews continues to warp the judgment of many Palestinians, including some of the participants at Columbia’s conference. Once again, the myth is spreading that the Israelis are weak of resolve, and so could be compelled to give up their crowning achievement, the State of Israel, and subsume themselves in a binational state—the so-called “one-state solution.” This is the product of an anti-Semitic delusion: that the rootless Jews, unlike all other peoples, will not defend their sovereignty to the hilt. Reject accommodation with Israel, urge the Palestinian extremists who clamor for “one state,” because ultimately the Jews are too cowardly to fight for their state.

This was the Palestinian error of 1948, and it is the Palestinian error of 2008. Nothing changes, because the Palestinians have never probed their own history critically, or accepted any responsibility for the decisions that led to their defeat. Instead, the sum of Palestinian intellectual life is a vast blame game, meant to evade the truth of 1948 and the self-loathing that it engendered. Alas, the shame is so great that the Palestinian intellectual class—still ridden with debilitating anti-Semitism—keeps insisting that all its past errors can be undone. “In resisting Israel,” Joseph Massad said to a Columbia conference last spring, “Palestinians have forced the world to witness the Nakba [1948] as present action; one that, contrary to Zionist wisdom, is indeed reversible.” From the Mufti to Massad, they never learn.