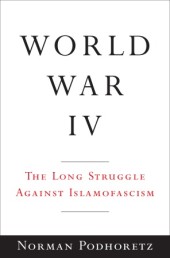 The November 2007 issue of Commentary runs a symposium under the title “What Kind of War Are We Fighting, and Can We Win It?” The point of departure is the new book by Norman Podhoretz, World War IV: The Long Struggle Against Islamofascism. Contributors to the symposium include Fouad Ajami, John Bolton, Max Boot, Reuel Gerecht, Victor Davis Hanson, Daniel Henninger, Bill Kristol, Andrew McCarthy, David Pryce-Jones, Claudia Rosett, Amir Taheri, Ruth Wedgwood, James Q. Wilson, James Woolsey and yours truly. Here is my contribution:

Norman Podhoretz wants to alarm us. At a time when many in America dismiss 9/11 as an aberration, and jihadism as a specter we have conjured up to justify military adventure, he insists that the enemy is real. Mired in denial, we have refused to see the obvious pattern in the succession of attacks against us, of which 9/11 constituted one more escalation. And despite 9/11, we have slipped back into our default position of complacency, while our enemies build new capabilities, construct more outposts, and inculcate hatred in the minds of millions. This is a world war, he insists, and our refusal to name it is the most obvious sign of our confusion.

Yet the notion of “World War IV” is also meant to reassure us. The United States prevailed in every great global contest of the 20th century, whether it took four years (World War II) or forty (the cold war). Now we confront a threat from another ideology opposed to freedom and democracy. But we have defeated such ideologies before, we tell ourselves indeed, they are destined to be defeated and once we get ourselves in gear, the outcome cannot be in doubt. It will just take a while. This world war, Podhoretz tells us, “will almost certainly go on for three or four decades.”

That is too reassuring.

The 20th-century world wars were preceded by another species of global conflict. For more than a millennium after the rise of Islam in the 7th century, Christendom and Islam were locked in almost constant warfare. Today’s war, unlike the last three world wars, is being fought largely across the very same divide of religion and civilization that separated European Christendom and Islam. Their ebb and flow extended over centuries. It is a point our enemies emphasize. “This war is fundamentally religious,” bin Laden has said. “The people of the East are Muslims. They sympathize with Muslims against the people of the West, who are the Crusaders.” That is what bin Laden needs this war to be, if he is to fight it on his terms.

We shudder to think the world might be sliding back into that sort of conflict, and so we deny even the possibility while heaping praise on Islam. “This is not a clash of religions,” President Bush has said. “The faith of Islam teaches moral responsibility that ennobles men and women, and forbids the shedding of innocent blood. Instead, this is a clash of political visions.” That is what we need it to be, if we are to fight it on our terms.

Six years after 9/11, the problem is that most Muslims believe bin Laden is right. Over the summer, a poll showed that 80 percent of the people in Egypt, Indonesia, Morocco, and Pakistan agree that the United States is trying to “weaken and divide the Islamic world.” We have not only failed to define the war for ourselves. We have failed to define it for the great mass of Muslims. The widespread belief among Muslims that we are waging war against Islam could extend it well beyond three or four decades.

We also underestimate its breadth. We conveniently prefer to think that Iraq is the central front in this war, because the United States has 150,000 troops there. For all the defeatism deftly exposed by Podhoretz, most Americans know it would be difficult for the United States to lose in Iraq. But the danger now is that we might be outflanked. If Iran acquires nuclear weapons, or Pakistan falls to jihadists, or parts of Europe are colonized by Muslim radicals, the consequences could be dire.

Norman Podhoretz and I are foreign-policy advisers to presidential candidate Rudy Giuliani, who sees Iraq as one of many fronts. “The danger of focusing on Iraq too much,” he has said,

We have a tremendous stake in the battle for Iraq. But if we invest too little on other fronts because of it, we could lose the war.

Finally, we have underestimated the resourcefulness of our enemies in exploiting our desire for democracy. Neoconservatives continue to deny the obvious: our Islamist enemies turn every “democratic” opening into their opportunity. Norman Podhoretz rightly pillories Jimmy Carter for having sacrificed the shah of Iran and allowed Ayatollah Khomeini, a “radical Islamist despot,” to seize power. The “blind” Carter administration “thought the United States would be better off without allies like the shah.” Alas, this blindness is perfectly emulated today by those who would cast aside Egypt’s Husni Mubarak on the off-chance that the Muslim Brotherhood will not replace him. Democracy promoters compete with jihadists in denouncing the evils of the Saudi monarchy, Pakistan’s president, and even Jordan’s king.

In World War II, Roosevelt allied with Stalin to defeat Hitler. Norman Podhoretz elsewhere has said that this alliance “was as much a moral imperative as it was a case of realpolitik.” This war cannot be won without similar alliances, and shunning them will only abet our enemies.

For the Bush Doctrine to survive Bush, it will have to incorporate all we have learned since he formulated it. Much of it comes down to this: the Middle East is not Europe, Iraq is not Germany, and Afghanistan is not Japan. (They are not Vietnam either.) The road to hell is paved with bad analogies, which are no substitute for lived experience and specific knowledge. According to the Greek poet Archilochus, “the fox knows many things, but the hedgehog knows one big thing.” The hedgehogs have taken the Bush Doctrine as far as they can. Now it is the turn of the foxes.