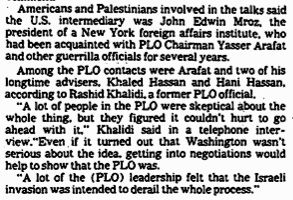 A reader sends me yet another piece of contemporary evidence from the mainstream U.S. media for Rashid Khalidi’s PLO connection, to add to the collection I assembled at the end of October. This one appears in the Los Angeles Times of February 20, 1984, in an article by Doyle McManus under the headline: “Account of PLO Talks Questioned: Reagan Unaware of Such Contacts, His National Security Aide Declares.” The article discusses reports of back-channel U.S.-PLO talks. One of the named sources is Rashid Khalidi, identified simply as “a former PLO official,” who is quoted verbatim on thinking within the PLO about the talks. By this time, Khalidi would have been in the United States (he left Beirut the previous year). McManus is a consummate professional, now for many years chief of the Los Angeles Times Washington bureau.

Khalidi’s PLO connection, or his past consistent claim of such a connection, is well established by a string of references in the mainstream media over an eight-year period (1976-84), not one of which he contested or corrected at the time.

When the election-season controversy surrounding Khalidi blew up, he told the Washington Post he would “stick to my policy of letting this idiot wind blow over.” But the wind just keeps blowing in more evidence. I am grateful to diligent readers who continue the search.

This item also has been added as an update to the original post “Khalidi of the PLO.”