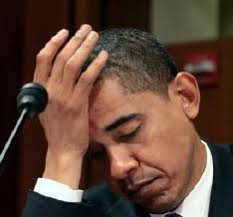 People in and around the Obama administration are taking the position that his low key on Iran is carefully calculated. It’s not that he doesn’t sympathize with the protesters, he just doesn’t want their cause to be identified with the United States. That would be a kiss of death. I’m not persuaded, and as I’ve suggested already, his real problem with Iran’s turmoil is that it’s just so inconvenient to a Palestine-first approach. Laura Rozen at her blog The Cable quoted an “Iran hand in touch with the administration” as saying that Obama “is dedicated to diplomacy in a manner that is almost ideological,” that he’s already decided what he wants to do in the Middle East “over the next eight years” (bit of presumption there), and that he doesn’t want to be “distracted” from the “larger strategic objective” or “let himself get shaken by stuff like this”—”stuff” referring to the reality in the streets of Iran and the Middle East more generally. If this spectacular hubris isn’t a formula for failure in the Middle East, what is?

Let’s begin with the claim that an American embrace of Iran’s struggle for freedom would harm rather than help the cause. Call it “1953 and all that,” and color me skeptical. I think most young Iranians are fed up with creaky mullah double-talk about America destroying Iranian democracy in 1953 (as if Iran has had democracy since 1979), Perfidious Albion (as though Britannia still ruled the waves), and the Zionist conspiracy (as if the mullahs weren’t conspiring daily with Hezbollah and Hamas). They’ve identified the threat to their freedom, and it’s their own unelected class of clerical overlords, driven by a will to total power. Just because the “Supreme Leader” repeats one of these archaic themes ad nauseum doesn’t mean Iranians believe it, and we shouldn’t assume they do.

However, there is an American (and Israeli) “kiss of death” elsewhere in the Middle East. Why is there a correlation between U.S. and Israeli endorsements of a “two-state solution” and the Palestinian stampede away from it, both Islamist and secular? Every time an American president or an Israeli prime minister declares that a two-state solution is a vital U.S. or Israeli interest, more Palestinians conclude it can’t possibly be in their interest.

“If the day comes when the two-state solution collapses,” then-prime minister Ehud Olmert told an interviewer, “then, as soon as that happens, the state of Israel is finished.” Could one devise a more diabolical way to delegitimize a two-state solution in Palestinian eyes than that? Obama claims that “it is not only in the Palestinians’ interest to have a state. I believe it is in the Israelis’, as well, and in the United States’ interest, as well.” For Palestinians, that’s one reason to support it, and two reasons to oppose it. Are the Olmerts and Obamas of the world completely ignorant of history and psychology? And even if Obama believes this (personally, I think it’s untrue—a Palestinian state isn’t in everybody’s interest), why say it? Each time he does, he undercuts his own “larger strategic objective.”

A smarter president would deploy the word “intolerable” not for the situation of the Palestinians (whose “president” has described that same situation as “good” and “normal”), but for the repression in Iran, whose courageous young people genuinely crave support. A smarter president would tell the Palestinians that the United States can uphold its Middle East interests forever and a day without a “Palestine,” but that it’s willing to try if Palestinians show the grit and unity that statehood requires.

Unfortunately, everything young man Obama knew about the Middle East before coming to the White House came from tainted sources. Now that his eight-year plan has run aground—in month five—acknowledging and adjusting to the “stuff” of reality will be a test of his smarts. If he refuses to let reality “distract” him, he’ll fail the test, and leave the Middle East worse than he found it.