This term, I’m teaching the introduction to the modern Middle East (Turkey and the Arab lands) at Shalem College in Jerusalem. I’ll try to post something from each class, with an insight from the late Bernard Lewis, who passed away in May. Below are entries for the first four classes of the semester.

Class One: The Retreat of Islam. Before Napoleon’s invasion of Egypt, the Ottomans suffered unprecedented defeats at the hands of the Habsburgs and the Russians. In my opening, I dwell on the Treaty of Carlowitz, 1699, in which the Ottomans signed off on the loss of Hungary, Transylvania, Dalmatia, Morea, and more.

Lewis placed great importance on Carlowitz: “The disastrous retreat that followed the second Ottoman failure at Vienna, in 1683, was the first clear and unmistakable defeat. At Carlowitz the Ottoman Sultan, for the first time since the foundation of the Empire, was compelled to accept terms dictated by a victorious infidel enemy.” “The defeat… sealed at Carlowitz inaugurated a long period of almost unrelieved Muslim retreat before Christian power.” It’s hindsight, and “Turkey in Europe” lasted another 200 years. But it’s a good point to begin the saga of Ottoman retreat.

This engraving, from 1700, shows the victorious Christian allies with a map of Europe spread before them. The Turkish negotiator, on the left, looks detached; in fact, he salvaged quite a bit. And as I tell my students, at least the Ottomans were in the room. Two centuries later, the maps would be drawn without them. (Image reproduced in Hans-Martin Kaulbach’s Friedensbilder in Europa 1450-1815.)

Class Two: Bonaparte in Egypt. In the second session of my introductory course, I analyze the French invasion of Egypt, 1798. Because it was led by Bonaparte (later, Napoleon) it’s the subject of much myth and iconography. The future emperor repackaged this military disaster as a moral triumph of the Enlightenment. It’s a lesson in spin.

Still, it’s often viewed as the starting line of the modern history of the Middle East, or at least the Arab part of it. And it’s not just historians. Edward Said took 1798 as the departure point of his book Orientalism: “With Napoleon’s occupation of Egypt processes were set in motion between East and West that still dominate our contemporary cultural and political perspectives.”

So it’s interesting that Bernard Lewis, who had a much stronger sense of history, thought otherwise. “The French occupation proved to be of brief duration,” he noted (three years, to be precise), “and Egypt was subsequently restored to Muslim rule.” “In 1798, the process of defeat and withdrawal had already been going on for some time,” he emphasized—in fact, “the debate among Muslims about what had gone wrong and how to put it right began immediately after the retreat from Vienna” in 1683. But that debate “was limited to the Turks who had borne the main brunt.” Yes, the French invasion of Egypt shook up the Arabs, who’d been “sheltered from reality behind the barrier of the Ottoman Empire, still, even in its decline, a formidable military power.” But the Arabs were still a sideshow.

Lewis would always point out that the French invasion must have been particularly alarming to Muslims: Bonaparte’s small sea-borne force conquered and occupied a huge country, and it took a British force to drive the French out. But Lewis put 1798 on a timeline that’s longer and wider. Unlike the Ottoman retreats in Europe, Egypt was only a setback. So I warn my students not to be overly impressed by Napoleonic glitter. It would take much more, and many more decades, to awaken the Arabs to their predicament.

A prime piece of Napoleonic propaganda is this heroic portrayal among his plague-infected soldiery at Jaffa, by Antoine-Jean Gros, 1804 (here, detail). As the Louvre website notes, “Gros has given Bonaparte the luminous aura and gestures of Christ healing the lepers.”

Class Three: Ottoman Modernity. In the third session of my modern Mideast course at Shalem College, I present the major reformers of the first half of the 19th century: Muhammad (Mehmet) Ali Pasha in Egypt, and Sultan Mahmud II in the Ottoman Empire.

Murdering opponents has an old history, and both of these reformers did a thorough job of it—Muhammad Ali, to the remnants of the Mamluks (1811), and Mahmud II, to the Janissary corps (1826). Then as today, there were plenty of Westerners who made excuses. “If judged wholly by our notions,” wrote one former British consul in Egypt, “the massacre of the [Mamluk] Beys was, indeed, an act of inhuman treachery. But it cannot be looked upon with the same feelings of horror that we attach to similar crimes which have been perpetrated by Christian princes.” Why? Over there, “they are accustomed from infancy to bloodshed, and punishments such as make civilised natures shudder.” Make of this what you will, it certainly evokes the shrug of the shoulders that’s greeted Bashar Asad’s liquidation of his opponents in our time.

The purpose of reform was to aggrandize the power of the ruler. I have the students ponder these words by Adolphus Slade, a British naval officer who became an Ottoman admiral:

When a nation, comparatively barbarous, copies the finished experience of a highly civilized state, without going through the intermediate stages of advancement, the few are strengthened agains the many, the powerful armed against the weak…. The sovereign’s subjects, who before had a thousand modes of avoiding his tyranny, have not now a loop-hole to escape by.

Slade would have mocked the idea that modernization advances freedom.

But the reformers won some battles, dug canals, expanded cities, opened schools and hospitals, sent missions to Europe, and (inadvertently) set the wheels of nationalism in motion. Bernard Lewis tilted a bit against the usual European celebration of these achievements. “We may question the assumption,” he wrote, that the effect of the reforms “represented an improvement on what had gone before.” But could it have been done differently? It’s a question that dogs the Middle East even today.

Below: Mahmud II at first robed himself like his traditional Ottoman forebears (left, around 1809). He later exchanged the elaborate turban for a modern-style fez, and the robes for Western jacket and trousers (right, 1830s?). 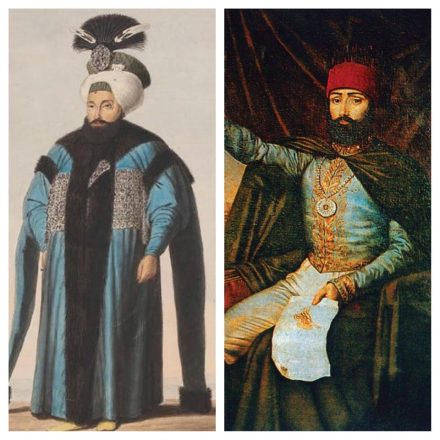 Class Four: Opera, Canal, and Debts. The fourth session brings us through Egypt’s Westernizing push under the Khedive Ismail, which some see as a belle époque, and others regard as the pride before the fall. It was something of both. The Paris-educated Ismail opened the country to European experts, enterprise, capital, and (in the end) intervention. “Egypt is part of Europe,” he announced.

It certainly might have seemed that way, in the new quarters of Cairo modeled after Paris, and in the grand celebrations marking the opening of the Suez Canal in 1869, attended by a large swath of European royalty. But in the end, Ismail took on so much debt from English and French lenders that the country sank beneath its weight. A foreign debt commission took over the country’s finances, Ismail was pushed out, the Egyptian military revolted, and the British occupied the country (1882) to protect foreign interests. This temporary measure turned into more than half a century of tight British control.

One of the episodes that always fascinates students is Ismail’s building of an opera house in Cairo. If Paris had one, Cairo had to have one too, and to get it going, Ismail commissioned the famed Giuseppe Verdi to produce an opera suited to Egypt. The result: Aida, which had its first performance in Cairo in 1871. Set in the reign of the pharaohs, the idea for the plot was inspired by the renowned French Egyptologist, Auguste Mariette (Pasha). Opera performances found a small but devoted audience in Egypt, and after the opera house burned down in 1971, Egypt built another one, a gift of Japan.

In an easy-to-miss footnote to his bestseller What Went Wrong?, Lewis made the kind of astute observation about the opera that was his trademark:

One of the central problems of the story is the dilemma of the victorious Egyptian general Radamès, torn between the loves of two women—Amneris, the daughter of Pharaoh, and Aida the Ethiopian slave, the daughter of the Ethiopian king with whom Egypt is at war. Caught between these two women, Radamès is driven to treason and finally to death. For a 19th century European Christian, this was indeed an agonizing dilemma. It would have been meaningless in Egypt, either in the time of the pharaohs or in Verdi’s own day, and the hero could have had both ladies; the princess by marriage as a wife, the slave by gift or purchase as a concubine and perhaps later, as a secondary wife. Were Verdi and his librettist trying to send a subtle message to their Egyptian patrons; or, more probably, were they simply uninformed or unconcerned about the situation of women in Egypt?

Below we see the spectacle of the opening of the Suez Canal, in the presence of the A-list. Ismail deployed tens of thousands of forced (corvée) laborers to build the Canal, but they weren’t invited to the party. It’s a point Nasser stressed when he nationalized the canal company in 1956.