In 1998, I visited India as the guest of the Indian foreign ministry, and asked to see the Shiite shrines of Lucknow, in Uttar Pradesh. I was fascinated by the imambaras, the shrines housing replicas of the Shiite holy tombs in Iraq, and was overwhelmed by the hospitality of my local hosts and their profound spirituality. Here I visit a school for the preparation of preachers, most of them from rural areas. On my right is the Raja of Mahmudabad, benefactor of the school, and a man of high learning and impeccable manners. Second on my left is the school principal, who many years ago did his degree in Islamic studies at Edinburgh. When it came time for me to depart, he whispered to me wistfully: “In your presence, I can feel the breeze from the West.”

When I first met Bernard Lewis in Princeton, in 1976, he was 60 and I was 22. After a few class sessions, he gave me a key to his office at the Institute for Advanced Study, and the mission of cataloguing the flood of incoming offprints. On weekends, I sat in his chair, in the midst of his vast library, and during the week I would meet him for walks in the Institute’s woods. Before or after, he would guide me through his library shelf by shelf, offering comments on books and lore about their authors. I prepared my dissertation under him, we became friends, and we remained friends until his death in 2018. Here we are seated together at a conference in honor of his 80th birthday in 1996. Who could have imagined on that occasion that his biggest-selling book still lay ahead of him? 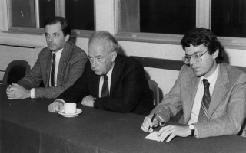 Rabin and the Professors

Yitzhak Rabin, at the time defense minister, drops in on a conference I organized at Tel Aviv University in 1984. To the far left: Itamar Rabinovich. Rabin respected academics, and later as prime minister he appointed Rabinovich to head Israel’s talks with Syria. Rabin could be instrumental in his use of scholars. A group of us were once summoned to meet him at the prime minister’s residence in Jerusalem, for an informal evening of discussion. All of a sudden, a camera crew entered. “Pay them no mind,” he said. “They’ve been following me around.” Later that week, the point of the exercise became clear: the state television broadcast “a week in the life of the prime minister.” Rabin didn’t want to be shown only in the company of generals and politicians. But professors could get his ear, he had an open channel to the best of them, and he was a frequent and popular speaker on campus.

Palestinian Authority minister Saeb Erekat (center) comes to Tel Aviv University in 1997; we exchange greetings with the then-representative of Tunisia in Israel. Those were heady days. At my invitation, both Erekat and Nabeel Shaath delivered the Dayan Center’s annual Jimmy Carter Lecture, before large audiences in Tel Aviv. I attended conferences on the peace process from Cairo to Casablanca, and spent a few days in Ramallah, on the receiving end of Hanan Ashrawi and the late Faisal Husseini. I also organized an exchange with the Cairo Peace Movement, and hosted Saad Eddin Ibrahim in Tel Aviv. Distant history. (And the Carter Lecture? Discontinued, and rightly so.) 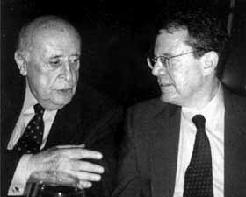 I dine with former Turkish president Süleyman Demirel. The late 1990s saw a flourishing of Turkish-Israeli relations. I set out to establish a program at my university, modeled on similar programs at American universities, funded on a matching basis by the Turkish government. I began to travel to Ankara once a month, until I finally reached Demirel himself. In an audience at Çankaya Palace, he promised me: “It will happen.” It did, and the resulting program at Tel Aviv University bore his name: the Süleyman Demirel Program for Contemporary Turkish Studies. The agreement, reached in 1999, was terminated unilaterally by Turkey’s Council of Higher Education after Demirel’s death in 2015. Omnia mutantur.