THE Arab past is contested ground. When the Arabs were strong and self-confident, no one interpreted it better than they. The Oxford scholar Albert Hourani makes this point obliquely in his new general history by devoting his prologue to a portrait of the great 14th-century historian, Ibn Khaldun. Yet the Muqadimma or Prolegomena of Ibn Khaldun was arguably the last great study of Arab history to be written in Arabic. As the West gained ascendance, Western scholars began to write histories that were more innovative and disciplined than those written by the Arabs themselves. The Arabs had lost control of their past. In recent years, they have sought to reclaim it through a campaign of denunciation against Western “Orientalists.” But nothing will avail, short of the appearance of a new Ibn Khaldun.

In style and sweep, A History of the Arab Peoples is a virtuoso performance. Hourani is freer on the smaller canvas of the essay, more fluent in his previous writings on the European understanding of the Arabs than on the Arabs themselves. Still, elegance and erudition remain his hallmark, and both are evident in this book. So, too, is his debt to the wealth of Western scholarship: Hourani has drawn upon its deepest traditions and has carefully distanced himself from the hysterical anti-Orientalism first propagated by Edward Said. (Hourani’s reservations are expressed in an essay that lends its title to his new collection, Islam in European Thought.)

But A History of the Arab Peoples is also an act of reclamation of the utmost subtlety — so subtle, in fact, that it will not always be recognized for what it is. Hourani’s genius is that he has insinuated a partisan reading of Arab history into a work that appears to be a broad synthesis of modern scholarship. His history does draw upon this scholarship, but it does so in a manner that is highly selective, even sanitizing. For the specialist, it is a pure delight to watch Hourani fashion consensus where none exists, or evade some controversy with a graceful turn of phrase. But Hourani has written this book, so he avers, for the general reader and beginning student — intellectual tourists who are completely in the hands of their guide. They may rest assured they will see no disagreeable sights. But they stand to miss a great deal of history, and are liable to misconstrue its meaning for the present. 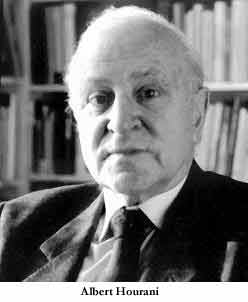 WHAT are Hourani’s readers certain to see? Far more sweat than blood, which is to say more society and economy, less politics and war. This preference feeds the narrative with the evidence necessary to sustain the book’s thesis. Yes, the book does have a thesis, although the demands of subtlety require that it emerge gradually from within the narrative. (Hence, no introduction or conclusion.) In short, Hourani maintains that despite endemic political fragmentation, the Arabs emerged from Arabia to forge a unified and self-sufficient society. That society maintained its equilibrium for a millennium, until the unprovoked intrusion of the West.

To make this thesis credible, Hourani must gloss over the political history of the Arabs, which was bedeviled by the problem of succession from the day the Prophet Muhammad died, and which culminated in government by castes of imported military slaves. Only by averting one’s eyes from politics to peoples, from state to society, is it possible to characterize Arab history as something other than “a thousand years of jealous autocracy.” (The words are those of H.A.R. Gibb, Hourani’s predecessor and mentor at Oxford.) The older Orientalist surveys of Arab history avoided the incivility of politics by dwelling upon culture and religion. Hourani achieves the same effect by focusing upon the workings of society at large.

And so Hourani steers his narrative out of the palace gates and into busy urban quarters, villages, and tribal encampments. We are escorted through markets and workshops; we measure the width of the streets. We enter the courtyards of mosques and homes; we pause to admire the gardens and furnishings. We see the pilgrims off to Mecca, and when plague strikes, we number the dead. At several points, the narrative soars upward, to survey the lay of the land, the soil, the weather.

Yet the reader will soon discern a repetitive pattern of omission. Whether the history of the Arabs has been more volatile than that of other peoples, no one can say. But violence has been close to the surface of the Arab experience at all times, not only in politics and war, but in the regulated conduct of social and economic life. A social history is licensed to omit battles and coups. But a social history of the Arabs cannot dodge, say, the slave market and the execution place, any more than a social history of North America can evade the slave market and the witch’s stake.

Consider the imperial capital of Baghdad in the Middle Ages, where Hourani’s narrative visits palaces, libraries, and surrounding farms, and introduces us to the great philosopher Ghazali. Contemporary accounts also have Baghdad teeming with black and white slaves, eunuchs, and concubines — a brisk trade that filled the markets with human goods from throughout the world. Yet in a brief mention of slaves, Hourani dissembles. Islamic law, he avers,

laid down that they should be treated with justice and kindness; it was a meritorious act to liberate them. The relationship of master and slave could be a close one, and might continue to exist after the slave was freed: he might marry his master’s daughter or conduct his business for him.

Instead of the routine of capture and castration, Hourani conjures up an improbable wedding scene. This evasion misses the opportunity to explore the economics of slavery, the many slave revolts, and the evolution of Islamic slavery over time. (Readers who wish to makeup for the omission may turn to Bernard Lewis’s Race and Slavery in the Middle East.)

Imperial Baghdad, flourishing center of civilization, also had its execution place, near the police headquarters. Consider the execution of the blaspheming mystic Hallaj in 922, as related by an eyewitness:

A large crowd formed whose numbers were considerable, countless. . . . They cut off one of his hands, then a foot; then the other hand, followed by the other foot. His head was cut off; then his body, in which there was still a trace of life, was hurled to the ground from the flagellation platform. And the trunk was burned.

Such spectacles were central to medieval urban life, in Christendom and Islam. But Hourani omits all mention of public punishment — spectacles of such telling effect that they survive even today in parts of the Arab world. Nor is there much on the role of popular violence, such as urban riots, rural rebellions, and banditry. Without them, the past appears flat — the repetitive movement of merchants, nomads, and armies across undulating expanses of desert and plain. And the longue durée in the history of the Arabs seems long indeed, since Hourani will not concede that the Arab ever entered into decline, even under Ottoman rule.

WE ARE left, then, with those Arabs who tended their gardens and flocks for a thousand years, until the modern armies of Europe intruded by force and sowed chaos. Hourani has a keener eye for the contradictions of the West, and he gives a nuanced account of the paradoxes of its imperialism — its confusion of liberalism and repression, of political trusteeship and economic exploitation. The part dealing with the Middle East in the age of British and French domination is persuasive, for it grows organically from Hourani’s own lifelong work on “the culture of nationalism” and “the culture of imperialism.”

Yet as the narrative follows the Arabs to political independence, the earlier pattern of omission reappears. The decades since decolonization have been a long train of disappointment and discontent. Usurpation of power by military strongmen, ostentatious wealth surrounded by seas of poverty, routinization of torture, recurrence of rebellions and wars — there is something tragically authentic about these ills. Indeed, they form the continuum of that past which is omitted from the first part of Hourani’s book. And once again, they are played down or simply ignored.

In 1982, for example, the Syrian regime of Hafez al-Assad crushed a revolt of the Muslim Brethren in the city of Hama by pummeling a large part of it to rubble, at a cost of thousands of lives. The journalist Thomas Friedman visited the site, and was so taken with the magnitude of the destruction that he made it an anchor of his own book, coining the phrase “Hama rules” to describe the ruthlessness of domestic politics as played by the Arabs. Hourani does not even mention the carnage of Hama, although he does not fail to give an account of Israel’s invasion of Lebanon that very same year, and the Phalangist “massacre of Palestinians on a large scale at the refugee camps of Sabra and Shatila.” By Hourani’s own standard of measurement, Hama would qualify as massacre on a massive scale, and its exclusion summarizes the limits of his vision.

The title of the last section, “A Disturbance of the Spirits (since 1967),” is misleading on every count. “Disturbance” is a euphemism (strangely evocative of imperialist usage) that fails to convey the depth of the crisis that grips the Arabs. It has not only crushed many spirits, but has broken many bodies. And it dates from the very restoration of the Arabs to independence, not from their defeat in the Six-Day War with Israel in June 1967. In all that concerns the raw present, one senses that this is a book written at a gaping intellectual distance from its subject matter. “No more than other observers did I anticipate that the 1980’s would be a period of what is loosely called ‘the resurgence of Islam,'” admits Hourani in his new book of essays. Nor does Hourani open a way to comprehend the shuddering violence that has descended upon the Arabs in the 1990’s, although his book will be read most widely for just that purpose. Oddly, there is more of a premonition of Kuwait in the 14th-century Ibn Khaldun. But his life was churned by the history he wrote, his historical sense sharpened by trying experience in Arab capitals and courts. He was rather hard on the Arabs, and his view would not have been regarded as correct at Oxford.