My short assessment of the turmoil in Iran appears (with nine other expert assessments) at Middle East Strategy at Harvard (MESH), and is reproduced here at Sandbox. 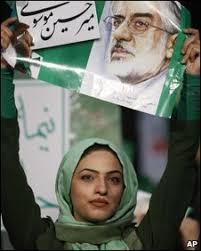 There are days when I’m supremely grateful that I’m not paid to make policy decisions. Those who must make them on Iran have much more information than I have, but it probably still won’t be enough, so that in the end, analogies will play as large a role as analysis. Already much of the public in the West has embraced the analogy between Iran’s protests and the “color revolutions” of Europe. The potential for error there is great: Iran’s politics are sui generis even in the Middle East. But there’s a bit of room for such an error, because the regime doesn’t have nukes. If it had them, we’d be biting our nails instead of tweeting on Twitter.

Harvard’s Stephen Walt, on his blog, made an assertion that exposes the fundamental weakness of the realist claim that the outcome doesn’t matter, at least to us: “In the end, what really matters is the content of any subsequent U.S.-Iranian rapprochement, not the precise nature of the Iranian regime. If diplomatic engagement led to a good deal, then it wouldn’t matter much who was running Iran.” Walt is right when he goes on to say that Mousavi, specifically, may not be a vast improvement over the Khamenei-A’jad duo. But in keeping up Iran’s end of any “good deal,” does it really not much matter who runs the country? In our own lives, we prefer to do business with reputable dealers, as opposed to known scam artists, thieves, and forgers. The meaning of this past week is that the ruling mob has been exposed, and that alternatives aren’t entirely unimaginable. No one should get their hopes up, but the moment Khamenei, A’jad, and even Mousavi aren’t the entire universe of options, there’s every reason to put engagement on hold.

And since it’s always better to have options, perhaps the United States should act to promote them. “The Americans do not have the experience or the psychological insight to understand Persia.” That was Ann (Nancy) Lambton, the great British Iranologist, back in 1951. (She thought Mossadegh could be readily overthrown; the Americans at first thought otherwise. She was right.) So it’s a long shot. But there may be an opportunity here, and perhaps even awkward Americans—now with an additional sixty years of experience and a president with psychological insight—can find it.