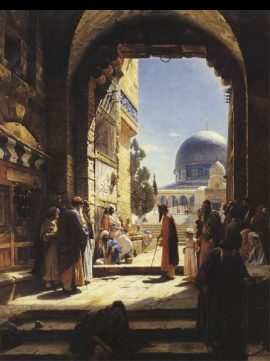 Israel has capitulated over the metal detectors (and surveillance cameras) that it installed last week at the entrances to the Temple Mount/Haram ash-Sharif. As anyone familiar with the long history of the “status quo” in Jerusalem knows, the “crisis” is wholly manufactured, and is but the latest chapter in a fifty-year Israeli-Palestinian struggle over sovereign authority.

The Palestinian aim has been to expand the autonomous administration of the Haram ash-Sharif, permitted them in 1967, and turn the esplanade into an extra-territorial enclave by leveraging Israeli and international fears of a wider conflagration. In this long-term campaign, they have had much success, and the latest “crisis” has produced yet another Palestinian “victory.”

The episode has raised the question of just what constitutes legitimate security measures at Islamic holy shrines and iconic mosques. We live in a time when the primary threat to the security of these sites arises from Muslims themselves—notably, extremists bent on using them as launching pads for violent acts designed to destabilize and terrorize. Across the Muslim world, governments are acutely aware of the vulnerabilities of these sites, and have taken measures to secure them. In particular, they have resorted to a very commonplace technology: metal detectors.

At this link, I provide some prime examples, from Egypt, Iran, Iraq, Saudi Arabia, Syria, and the United Arab Emirates. How do these states differ from Israel? They are effective and sole sovereigns over the holy shrines and major mosques in their territory. Israel apparently is not.

“The Metal Detectors of Islam,” here, for a quick trip to Islam’s bucket list of top sites. Please place your keys and camera in the basket.